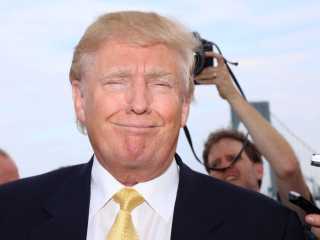 By and large, Democrats have stayed out of his way, so far, because they would prefer him as the republican candidate. He legitamizes their most outlandish caricatures of conservative ideology. He is what republicans look like to democrats. Speaking as a republican voter, I abhor that association.

I’ve overheard democrats telling other democrats to rock the vote in the republican primaries and vote for Trump. This ploy is a powerful one. It inflates his popularity in primary season–and potent plan when dealing with egomaniacs(!)–preparing for a swift and violent turn around in election season. When the primaries are over, Trump’s campaign will sink like a miniature replica of the Titanic, only there are far more glaciers in Trump’s path: megolomania, political inexperience, impossible promises, misogyny, bigotry, shallowness, and scores of damning sound bytes.

Democrats know that he’s not socially conservative enough to win the loyalty of tea partiers. For example, he has shown no strong concern for the defenseless children-in-utero. He’s a misogynist who objectifies women. He’s utterly dull and unrefined on racial and ethical issues, bounding toward foolhardy claims about “the blacks” or “the mexicans” with every speech. Any one of those claims, circulated enough, would be a gaping hole in his campaign once democrats decide to turn on him.

Trump isn’t ethical enough to earn the “character vote” from Christian conservatives and the moral majority. He has enough skeletons in the closet to populate a Tim Burton movie.

His most persuasive talking point is immigration, but recent history shows that his promises are empty, and republicans are too divided on the issue to stand behind him on this. I take the immigration issue very seriously, but republicans just don’t have a single unified stance on it; hence moderate reforms, and gradualism are far more promising than bombastic claims about making Mexico build a wall. [How do you propose to keep thousands of businesses running when a Trump-esque deportation of 30 million immigrants skyrockets their cost of operation overnight?]. Unfortunately, he’s just cocky enough that he’s liable to pull an unconstitutional stunt like Obama and force his immigration policy on America even if he has to sidestep congress to do it. Conservatives who are willing to ditch the constitution or the bill of rights for want of a strong military, or safety concerns at home are NOT CONSERVATIVES. There’s a real tension here between safety and freedom, and Trump just doesn’t seem to realize or care how delicate that balance is. Delicacy is not Trumps forte.

I grant that Trump has useful CEO experience, and he will probably be an above-average negotiator. But the position of President doesn’t operate like the CEO of a business. A CEO has far more latitude, fewer checks and balances (i.e., fiat, not democracy), and could be a megolomaniacal tyrant so long as the business is profitable–even if the product they sold was morally bankrupt.

In short, Trump is validating most every Democratic stereotype of capitalists. He’s Lex Luthor. And he makes sincere conservatives like me look bad. He makes my job harder because I’m trying to defend conservative principles while this bombastic toupee is shooting off at the mouth, fear-mongering, oversimplifying, and misleading the masses. True conservatism takes character, because we can never be great if we won’t first be good. Free markets–whether in speech, academia, religion, in trade, etc.–collapses in selfish skepticism when people aren’t modeling honesty and good faith in their dealings. Trump would set back true conservatism 30 years, literally. He embodies the villainous traders in the movie WALL STREET.

4 thoughts on “A Vote for Trump Is a Vote for Democrats!”