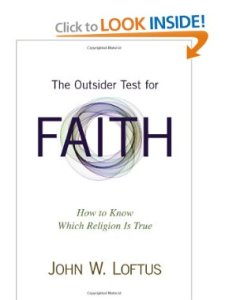 Dallas area atheist John Loftus has a book called, “An Outsider Test of Faith.” I have not yet bought the book. I’m not committed yet to reading it, but it seems interesting enough to investigate a bit through amazon previews and such. So far, I’m finding a preliminary objection–and one which some “Loftus Scholars” like David Marshall have corroborated–is that the outsider test of faith collapses when applied to itself.

Loftus asks, in the introductory pages, whether one should start from a position of faith or a position of skepticism. This is a fair question, and he rightly acknowledges that full neutrality is practically impossible. Agreed.

He then proposes a few theses on route to his conclusion.

Thesis 2: The Religious Dependency Thesis–we are religious creatures, irrationally so, such that we lean even against all evidence and reason towards religious interpretations of reality.

From these he inductively concludes that any given religion is highly likely to be false, given such prior conditions.

A few positives of this approach are that his opening expression seems careful (enough) and defensible, to a point. It’s not formally valid, but it does not seem to be offered with modal logical rigor. It’s more of a probability assessment. Its pretty common knowledge that people tend to follow the faith of their parents and people are generally quite prone to religion.

The most obvious problem with this outsider test of faith, however, is that it applies equally well to atheism, agnosticism, and skepticsm. Thesis 1 should be called the Religious and Irreligious Diversity Thesis–Buddhists tend to raise buddhists, atheists tend to raise atheists and so on. Hence, an atheist’s beliefs are not especially truthful–on surface assessment–if he was conditioned into it by his parents, or professors, or a strong peer group.

The second thesis has some other flaws with it. “The Religious Dependency Thesis” mistakes non-rational for irrational. I do not reach a belief in my own existence through rational inference; I reach it through direct awareness. Yet it’s silly to fault a person as “irrational” for believing in his own existence. His self-awareness is sub-rational, not anti-rational. In that sense it is reach from outside of rational inference and therefore non-rational. Religious awareness is claimed, by at least some, to be so obvious and directly known that it would be a non-rational kind of knowledge. Now I’m not defending this counter-thesis, but just proposing that some heavyweights have gotten behind this idea calling it the “Sensus Divinitatis” (Calvin and Aquinas) or “Properly Basic Knowledge” (Plantinga). And the fact that children seem to be “born believers” is not direct evidence against theism at all. Quite the contrary, if such basic epistemic modalities are opposed fundamentally, consistency demands we oppose equally fundamental modes of knowing/knowledge by skeptical principle. Even if we don’t oppose all such “basic” beliefs, we should at least have a comparably good reason for absorbing some while deflecting others.

Why then are people so chronically prone to religious belief? Perhaps its true. Perhaps not. Either way, one should not ASSUME that widely held beliefs are false unless there is at least as much initial evidence to suggest it’s false. Sure, a billion people could be wrong, but neither is it prima facia likely that that many people are wrong if no comparable counterevidence is given.

Also, on the Religious Dependency Thesis, it could be the case that some people are innately non-theistic. Even by the Proper Basicality theory (Plantinga) they might have malfunctioning cognitive abilities. Should that initial non-belief be treated as false until proven true? No, they may be correct–from the start. And if there were billions and billions of atheists, who were chronically atheistic whether they came from atheistic upbringings or not–if that were the case, then atheism would have an initial “bump” in its prima facia evidential standing. It would gain probability since “two heads are better than one,” and a billions heads are even better. Truth is not achieved by vote. But, frankly, credibility is.

Also with the Religious Dependency Thesis, Alvin Plantinga’s “Evolutionary Argument Against Naturalism” comes to mind. Many atheists like Loftus think that religious belief can be explained for its survival value, in spite of its falsity. But the same could be said of naturalism, atheism, or skepticism. These might be broadly truthless approaches to reality, but they are effective enough at serving survival that they persist for another generation.

I can’t claim to have a wide or deep knowledge of Loftus’ “Outsider Test of Faith,” but his opening premises seem deeply flawed already. Perhaps in the course of the book he gives some strong and objective reasons for preferring skepticism over belief, but so far in the opening pages he does not seem like he’s heading there.

8 thoughts on “An Outsider Test of Faith – For Insiders”